Connecticut has always been a bit elusive for me, since I’ve moved to New York. While part of the tri-state area, and having dated a couple guys from Connecticut, I still could never think of a good enough reason to go. Part of what I am enjoying about this mission to see all 50 states is that I’ve stopped waiting for permission or an opportunity to arise. If I want to go, I’m going to go. However, even this trip did get postponed a couple times. But now I can check off Connecticut and say I am 1/10 of the way to my goal of all 50!

Connecticut is a mix of small coastal and rural towns. Just to give you an idea of how big the third smallest state in the US is, Connecticut is just slightly larger than the country of Montenegro. Perhaps due to the lack of bigger cities, I decided to head to the capital, Hartford. Hartford is just over a 2 hour drive out of New York City, and Peter Pan Bus Lines offers an express service out of the Port Authority Bus Terminal. Naturally, I booked this via Wanderu again. I caught the 7:45 bus, planning to arrive in Hartford around 1030, and had to seriously caffeinate myself to get going in the morning.

I have mixed feelings about Port Authority at this point. It is much nicer to go to an actual building to catch your bus. Often in NYC, the other option is to go catch a bus on a street corner near the Javitz Center on 11th Ave. This can result in you waiting for the bus in the rain, so I tend to think traveling from an actual bus terminal is a positive. However, Port Authority has to have been designed by a drunk. The signs are incredibly confusing and you have to go up stairs to find the stairs to get down to the lower levels. It’s a mess. I still get confused each time I go there. At this point, I just leave myself an extra 10-15 minutes to find anything. Port Authority can also be insanely creepy at 745 AM on a Saturday. As I headed down the stairs to the lower level, I saw a man in a backwards hat, baggy jeans and a baggy shirt sat at painted piano (really an art installation) playing a soft melody. It was one of those sights that just screams, “YOU ARE IN NEW YORK!”

I made my way to my bus and promptly fell asleep. When I awoke, I checked my Google Maps and saw we were about 20 mins outside of Hartford. I would arrive about a half hour early, much to my surprise. The first thing that really struck me was how few people were around. This is always my first reaction after getting out of New York City, but with Hartford it was really striking. New York City has a population of just over 8.5 million. The Hartford Metro Area has a population of just over 1.2 million. It’s a drastic change in population density.

I made my way out of the train station and saw Bushnell Park across the street, so I decided to go check it out. I could also see the Connecticut Capitol Building in the distance and figured I would cut through the park to the Capitol. Bushnell Park is actually the oldest publicly-funded park in the country. The park was approved by a vote of the citizens in Hartford in 1854, during a time when people were starting to realize the need for public green spaces. It’s an absolutely gorgeous park, with the state capitol building on a hill in the distance. I spotted a fountain with a deer on the top, which honestly looked like it could be from Scandinavia with the exception of the Native Americans in headdresses at the base.

I headed up the hill to the Capitol building and wandered around it. Towards the backside of the Capitol, there is the Supreme Court and the Public Library. I decided to walk down Main Street to a cafe that wasn’t Starbucks. I landed on Story and Soil Coffee. It’s a cute little cafe, with outdoor seating, less than a 10 minutes walk from the Capitol. I picked up an iced chai and a mixed berry muffin. While not a huge fan of the muffin, the chai had just the perfect amount of cinnamon.

The main reason I had wanted to go to Hartford was to check out the Riverfront Sculpture Walk. Sponsored by Lincoln Financial, the sculptures all celebrate the life and legacy of Abraham Lincoln. I’m a history nerd, and a big fan of bodies of water in general, so I figured it would be a good spot to get some nice photos. The Sculpture Walk is along the Park River (also known as “Hog River”).  I had to cut back through Bushnell Park to get over to the river and on my way I found the Soldiers’ and Sailors’ Memorial Arch. It is a Gothic style memorial arch to the citizens of Connecticut that fought and died for the Union in the Civil War, that seemingly pops out of nowhere. There is a similarly named memorial arch in my favorite park in Brooklyn, Prospect Park. The arch in Hartford was completed in 1894, with one side of the arch displaying the story of war and the other displaying the story of peace. It’s really impressive and looks like it could be a part of a medieval castle. 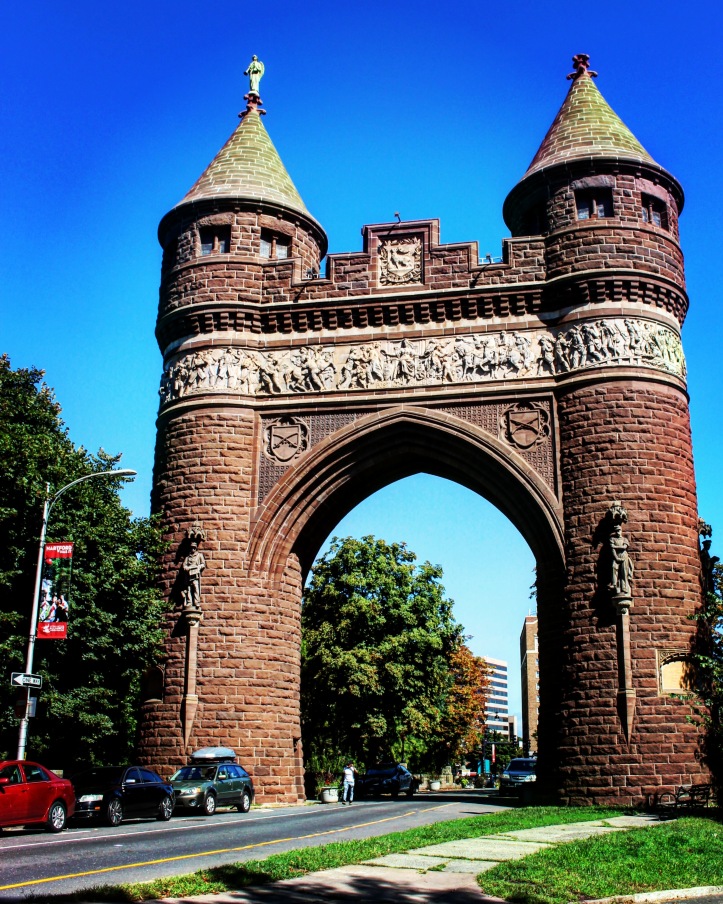 On the walk down to the Riverfront, I passed by the Old State House of Connecticut. The Old State House is the building where it was decided that Connecticut would become a part of the United States of America. In 1788, Connecticut was the 5th state to join the Union. It also played an important role as a meeting point for French and Colonial American troops during the Revolutionary War, prior to the defeat of the British. It is where Rocheambeau’s troops meet up with Washington before they marched onto the siege of Yorktown. (Side note: Rocheambeau’s real name is Jean-Baptiste Donatien de Vimeaur, comte de Rochambeau.) I always find random historical gems like this so interesting. I feel that while, yes I do remember learning about this in school, I don’t really “know” it until I’ve been there and experienced it. It’s like the French difference between savoir and connaître; there’s a difference between knowing a fact and knowing someone personally. Something about seeing these buildings in person feels like I’m crossing that knowledge gap. The beauty of travel, right? 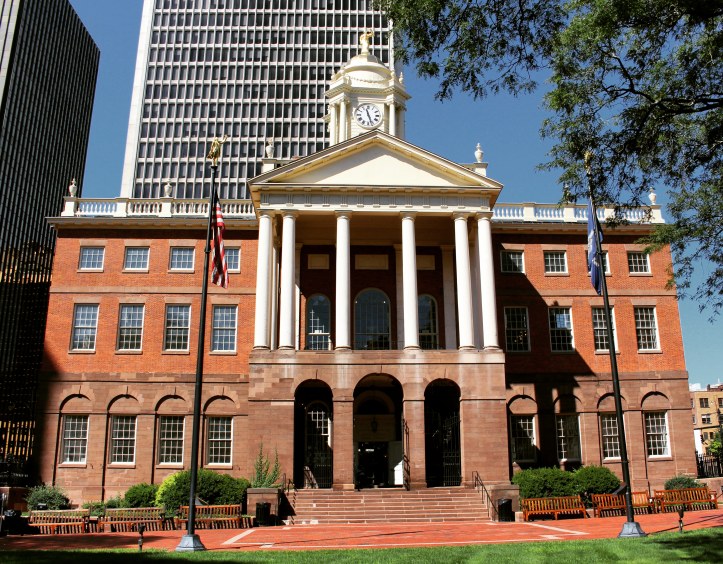 As I finally made my way to the Riverfront, I could start to see the river and the city expand out in front of me. The Park River is certainly not very large but rivers always make me think about history. History was on my mind a lot, okay? Something about how crucial they once were to literally every facet of life just a couple hundred years ago, and now we mostly use them for recreation boggles my mind. The Sculpture Walk is a series of bronze statues all dedicated to the life of Abraham Lincoln. Growing up my grandparents lived in Springfield, Illinois, which is Lincoln-town USA really. I found it was a bit odd that there was a dedication to Lincoln in a state he didn’t really have a connection to, but I suppose when Lincoln Financial sponsors it then it makes sense? It was really peaceful and serene down by the water. With not many people around, I could actually enjoy a moment to myself down by the water in the sunshine. I was right, the Riverfront made for some great pictures too. I couldn’t help but think that Hartford was an instagrammer’s dream, with all the old buildings and so few people walking around. I was really pleased with the results my day of shooting photos in Hartford.

At this point, I was getting fairly close to my 315 bus back to New York. I grabbed a quick lunch and headed back to Union Station. I know I said in a previous post that every city has a Penn Station. I’d like to update that statement – every city has a Penn Station OR a Union Station. I’m convinced. I will update you if I find one that doesn’t. Much to my surprise I had actually got to the station about an hour ahead of time. As I tend to do, I talked to the gentleman behind the counter and he was able to swap my ticket for the 2 PM express back to New York City. While I had arrived in Hartford early, getting back to New York was another story. It took just over 2.5 hours to get back. This is not surprising with New York. As I left Port Authority, I saw the same man playing the piano still. It was as if the universe was screaming at me, “YOU ARE BACK IN NEW YORK!”

All in all, I’d say my day in Hartford was a success. I’m getting better at these little day trips and just spending time by myself. I think this was the first solo trip I’ve done that I was actually somewhat excited for. I had a rough week at work and something about just getting out of the city to clear my head a bit really spoke to me. I got some terrific photos and I learned a few new things. I’d say Hartford is a bit of a hidden gem in the US. There were definitely a few things I didn’t get to do and see. When it comes to smaller cities in America, Hartford is a definite must-see.

Lessons learned on this trip: pack better snacks and a lunch. It’s an easy way to save money and to make sure you keep you’re energy levels up. Also, wear sunscreen (repeat of Baltimore much?)