Not a State- Washington DC

While technically not a state, it seems appropriate to start this mission in the nation’s capital. I’ve just returned from a lovely weekend down with my Uncle Martin and am feeling refreshed and inspired to hit all 50 states. DC is so unique, because there are hints of all 50 states within one city. I told myself nothing previously visited would count – and I had been to DC ages ago (like around age 10). I went last year to help Martin look at apartments, but did zero sight seeing on that trip. It felt like a good place to start, considering it would be like new 18 years later.

After work on Friday, I schlepped it to the Port Authority Bus Station. It was a bit stressful, as I didn’t leave myself much time and protesters were blocking the streets up by Times Square. Port Authority is also so terribly designed, I feel like I get lost any time I step foot inside. But I made it on time and only minorly sweaty for my bus. I booked OurBus via Wanderu. I’m slowly gaining an obsession over Wanderu- I can’t sing the praises of them enough. I’m sure a post on them will be written in due time. This was the first time I’ve ever booked a bus that was completely full. I hadn’t realized it was Pride weekend in DC, which I’m guessing why it was so crowded. They did hand us rainbow flags and cupcakes as we boarded though – a nice little after-work pick me up. I got into Union Station in DC around 1130 PM, where my uncle met me so we could walk back to his apartment on Capitol Hill. As we walked, we passed the White House and the Capitol Building all lit up. There’s something really impressive about the way these two very white buildings are lit up against the dark sky.

My uncle said it most appropriately – DC is a “monumental city”. It’s a city designed that was certainly designed to impress, with monuments littering the cityscape. It’s not a very tall city, like the way New York is- so it’s quite easy to turn a corner and be greeted with a grand view of the Washington Monument, for example.

Our Saturday morning started at Peregrine Espresso a short walk from Martin’s apartment. We wandered through the artisans’ market over to District Doughnuts. There, we ordered the largest, most sugary donuts we could. I, personally, went with the funfetti and Martin with the brown butter. For those of you unfamiliar, my uncle and I are in love with artisanal donut shops. It started as a joke- donuts are literally fried dough, what could possibly be artisanal about it? But as we’ve traveled and explored more and more of these fancier doughnut shops, it’s become a bit of a running joke with us. We always have to find the best donuts in whatever town we are in. District Doughnuts was absolutely delicious, in my expert donut tasting opinion, and I would highly recommend.

After heading back to the apartment to get cleaned up a bit, we headed to the National Botanical Garden. As we walked in, we see a number of tables with women from Hawaii making leis for the King Kamehameha Lei Draping Ceremony the next day. After going to school in Hawaii, I knew June 11 was King Kamehameha Day (we would get the day off from summer classes) and that there was a Lei Draping ceremony to celebrate the founder and first King of the Kingdom of Hawaii. I was absolutely STUNNED to see this happening on the other side of the world, literally, in Washington DC. For those of you familiar with Hawaiian history, you will remember that Queen Liliuokalani spent 10 years traveling back and forth from Hawaii to DC to plead the case of Hawaiian Independence unsuccessfully. It was that extensive, rough travel that damaged her health and ultimately led to her death. To walk into the National Botanical Gardens and see women preparing for the Lei Draping Ceremony the same way they would in Hawaii was really a beautiful sight to see. As I watched a lady explain to a small child how to make a lei, it really struck me just how unique of a country the US is and how unique of a city DC is. It was a true “American melting pot” moment for me. Everyone is here simply trying to live and better the lives of their communities. Washington DC really does pull people from all over the country. 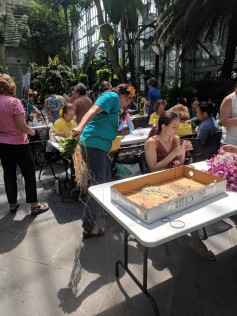 The National Botanical Gardens were really cool over all. It was nice to walk around in the misty greenhouses given how hot it had gotten outside. We checked out a couple of presentations and walked through each of the gardens. We then headed over the the National Art Gallery. The other nice thing about DC is how close and clustered things are. The National Art Gallery was basically across the street from the Botanical Garden, and right next to the Capitol Building with a view of the Washington Monument.

The National Art Gallery was a lot of fun, just wandering and checking out the contemporary art. I didn’t much care for the classical art. In my opinion, it should have focused more on American artists, considering it’s the National Gallery. Obviously, there were no American artists during the Middle Ages – so I was much more interested in the contemporary section. You could spend a whole day in the National Art Gallery though, just getting lost and admiring everything. The museum has a really cool lay out and the buildings are absolutely gorgeous. The funniest moment of the weekend had to be seeing two guys, both dressed as Spiderman, wandering the gallery together. Why would you BOTH be dressed as Spiderman? There’s only one Spiderman. I started to feel a bit sick from all the sweets that day (lesson learned), so we headed back to nap and clean up a bit for the evening.

We had a lovely dinner at The Bird, which is in a recently gentrified downtown neighborhood. The whole menu is poultry essentially. I had gone last year by myself, as I had some time to kill while waiting for Martin’s flight to get in. It was great to come back and take him this time in the summer. We topped off a delicious dinner with some great wine and then headed off to see Camelot at the Shakespeare Theater Company. It was a pleasant evening walk over to the theater. We passed the Presidential Portrait Gallery on the way, which will definitely be on my list for next time. The play was good – I just find myself wondering if I don’t have enough culture for musicals. I end up bored and wishing it would be done. But I can still appreciate the hard work and talent of the actors that went into it.

I had a fairly early morning bus the next day. I managed to pull a completely bone-headed move and thought my bus was later than it actually was. This led to me arriving at Union Station after my bus had already left. Normally, something like this would give me an anxiety attack, like full-blown. I don’t know what it was but I think having Martin with me really help keep me calm and relaxed. He’s a good voice of reason. We ran around to all the little bus kiosks to find the cheapest and/or quickest bus route back to New York. Thankfully, I still managed to make it back by early afternoon, so I could be lazy and do none of my errands while I dreaded my return to real life.

There are a few lessons to be learned after this first trip on this grand mission- and what is the point of doing this if we aren’t going to reflect and learn from each stop along the way?

Lesson 1: Take care of yourself. I ended up fairly sick after we installed Martin’s window AC unit for the summer. We had forgotten to clean out the filter first, so sleeping through the AC blowing out crud all night I think is what did me in. It’s harder to recover during the work week and when you’re trying to do weekend trips like this.

Lesson 2: You don’t need to stick to a plan so rigidly. I’m very rigid with busses, planes and trains. I think this was the first time I had ever missed a scheduled trip due to my own mismanagement, so it was a new experience for me. It was a big eye-opener for me and has taught me to be a bit more flexible when I plan these weekend bus trips.

Lesson 3: I actually WON A FREE TRIP FROM WANDERU! I posted a picture of the Capitol Building on Instagram and was later contacted by Wanderu that I won a free one-way ticket worth $50 to anywhere. If I wasn’t a customer for life before, I definitely am now. This felt like a cosmic nudge in the right direction – that this mission to see all 50 states will continue to be positive for me if I continue to pour my time and effort into it. Sometimes you need those cosmic nudges to keep you encouraged.

For the first trip, I think this was wildly successful and definitely want to return to DC some point soon.